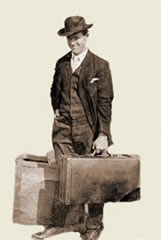 A family in the building trades, rich in history and rooted in strong values, the Gabrielsen Family is now in our fourth generation. Some of the values handed down through the generations include, pride in their work, honesty which is combined with a good work ethic. The Gabrielsen name has always stood for customer service and doing each project like it was their own home.

During the heyday of Norwegians coming to America, Adolph Gabrielsen arrived at Ellis Island in 1906 at the age of sixteen. Like many other Norwegians, he worked with wood including work in shipyards in New York and California. He was excellent with an adz, a wood-carving tool. Later he went into the flooring business, installing wood floors and scraping them by hand. It took hard work and skill to achieve excellent results and Adolph quickly garnered a reputation as a fine craftsman of wood flooring. And everyone loved “Pop.” 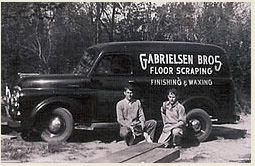 The second generation consisted of twin brothers, Walter and Adolph Gabrielsen Jr. Like their father, they continued in the wood floor business. New electric floor sanders had just come on the market and the brothers purchased one for three hundred dollars. Continuing the tradition of pride in their work, they were considered among the best floor sanders and finishers throughout Long Island. Each floor was treated like furniture and Walter and Adolph Jr were soon in demand to work for the estates of Long Island’s famed “Gold Coast.”

In the mid-sixties, Walter expanded the business into building new homes, as Walter Gabrielsen – Custom Builder. Each home was custom built with quality materials and superb workmanship. He passed along his strong work ethic to his six sons as they learned the trade and came to work for him.

The third generation, George and Tom Gabrielsen went into business in 1975 at the early ages of 23 and 22 respectfully. They were partners who called the company “Gabrielsen Builders.” They were involved with all aspects of building both new custom homes and alterations to existing houses. Most of their work was done on the North Fork of Long Island and the reputation of quality builders continued. Attention was also given to customer service, creating many satisfied customers throughout the area. Many of these clients, who’ve become repeat customers, recommend Gabrielsen Builders to their children, now settling with families of their own. 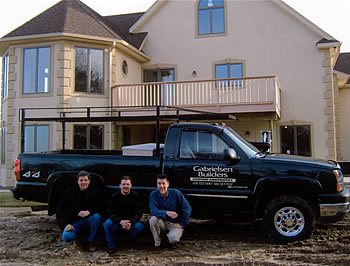 The fourth generation came alive with the arrival of Robert Gabrielsen, George’s son. He started in the building trade at the early age of seventeen. Working alongside his Uncle Tom for many years taught him skills in framing and high end trimming. Robert also excelled in the trades and has now become one of the North Fork’s most talented craftsmen.

Robert has also brought new ideas into the family business including modern technology, the use of computers and marketing the family business to the North Fork of Long Island. He has brought Gabrielsen Builders to a level that would surely make his great-grandfather proud.

We have worked hard to make Gabrielsen Builders a successful North Fork business. The fifth generation was just born and will be taught the same strong work ethic that has been part of the Gabrielsen family throughout all generations. Our family values remain our priority, chief among them honesty. Our children will also be taught the importance of customer service in addition to a job well done to continue in the tradition that is the Gabrielsen name. A name where people can always put their trust.

This website uses cookies to improve your experience while you navigate through the website. Out of these cookies, the cookies that are categorized as necessary are stored on your browser as they are essential for the working of basic functionalities of the website. We also use third-party cookies that help us analyze and understand how you use this website. These cookies will be stored in your browser only with your consent. You also have the option to opt-out of these cookies. But opting out of some of these cookies may have an effect on your browsing experience.
Necessary Always Enabled
Necessary cookies are absolutely essential for the website to function properly. This category only includes cookies that ensures basic functionalities and security features of the website. These cookies do not store any personal information.
Non-necessary
Any cookies that may not be particularly necessary for the website to function and is used specifically to collect user personal data via analytics, ads, other embedded contents are termed as non-necessary cookies. It is mandatory to procure user consent prior to running these cookies on your website.
SAVE & ACCEPT